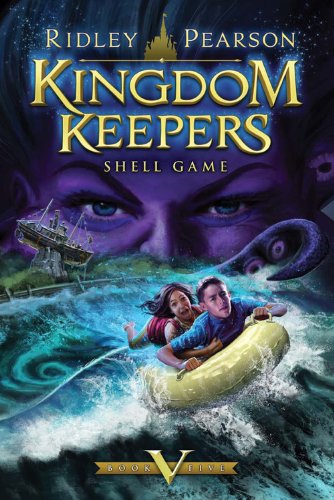 Reseña del editor As the Disney Fantasy joins the cruise fleet, a special treat is in store for guests aboard its inaugural sail from Cape Canaveral to Los Angeles: the Disney Host Interactive teenage guides will be part of the Fantasy crew.Finn, Maybeck, Charlene, Willa, and Philby are to attend the cruise as celebrity guests, and to perform a ribbon cutting for the DHI server to go live. The Fantasy is now the most advanced cruise ship in the world.But all is not right belowdecks. Strange things are happening. Unexplained phenomena. Only the Kingdom Keepers know the truth behind their invitation: nearly every Disney villain is represented onboard the new ship: whether on its decks or in its theaters. It's believed the Overtakers have infiltrated the cast and are ""stowaways."" Worse: it is believed they have stolen an important journal that once belonged to Walt Disney himself--Finn has been having dreams about this--and that some kind of mission is planned.The ship sets sail filled with enthusiastic guests and crew, and the battle is on in new and exotic arenas: the beaches of Castaway Cay, the caves of Aruba, the locks of the Panama Canal, Costa Rica's rain forest zip line . . . But the end game is far more complicated and intense than anything the Kingdom Keepers had planned on. If the Overtakers get their way, a power will be unleashed that no one will have the ability to vanquish: Chernabog, dormant for years, is about to have his full powers restored. . . . Biografía del autor Ridley Pearson is the award-winning co-author, along with Dave Barry, of Peter and the Starcatchers, Peter and the Shadow Thieves, Peter and the Secret of Rundoon, Peter and the Sword of Mercy, Escape From the Carnivale, Cave of the Dark Wind, Blood Tide, and Science Fair. In addition to Kingdom Keepers: Disney After Dark, Kingdom Keepers: Disney at Dawn, Kingdom Keepers: Disney in Shadow, and Kingdom Keepers: Power Play, he is also the author of the young adult thrillers Steel Trapp: The Challenge and Steel Trapp: The Academy. He has written more than twenty best-selling crime novels including Killer View and Killer Weekend. He was the first American to be awarded the Raymond Chandler/Fulbright Fellowship in Detective Fiction at Oxford University.