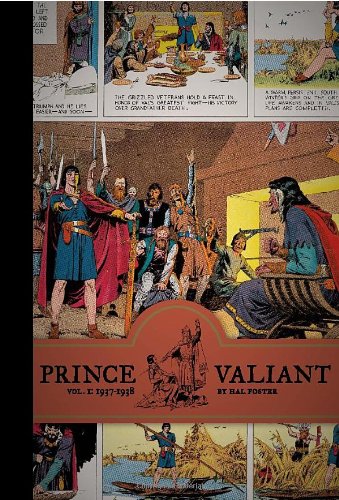 HAROLD FOSTER'S LEGENDARY MEDIEVAL EPIC, FINALLY IN ITS DEFINITIVE EDITION. Universally acclaimed as the most stunningly gorgeous adventure comic strip of all time, Prince Valiant ran for 35 years under the virtuoso pen of its creator, Hal Foster. (Such was its popularity that today, decades after Foster's death, it continues to run under different hands.) The giant Sunday-funnies pages (Valiant ran only on Sundays) gave Foster a huge canvas upon which he was able to limn epic swordfights, stunning scenes of pomp and pageantry, and some of the most beautiful human beings - male and female - ever to appear in comics. And he matched his nonpareil visual sense with the narrative instincts of a born storyteller, propelling his daring young hero from one crisis to another with barely a panel to catch one's breath. Prince Valiant has previously been widely available only in re-colored, somewhat degraded editions (now out of print and fetching collectors' prices). Thanks to advances in production technology and newly available original proof sheets, this new series from the industry leader in quality strip classics is the first to feature superb restored artwork that captures every delicate line and chromatic nuance of Foster's original masterpiece. Comic strip aficionados will be ecstatic, and younger readers who enjoy a classic adventure yarn will be bowled over. Book One will be rounded out with a rare, in-depth classic Foster interview previously available only in a long out-of-print issue of The Comics Journal.