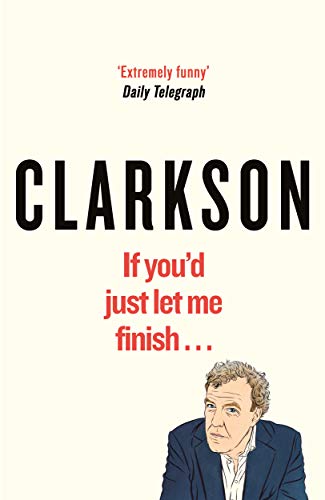 Clarkson is back with a brand new book of hilarious stories and observations about our gone-wrong world.
___________

In November 2016 we woke up to the news that the forthright presenter of a popular television programme had become the most powerful man on the planet. His name, sadly, was not Jeremy Clarkson, but we might not have been any more surprised if it had been.

Because the world seems to have taken a decidedly odd turn since Jeremy last reflected on the state of things between the covers of a book. But who better than JC to help us navigate our way through the mess?

And while he's being trying to make sense of it all he's discovered one or two things along the way, including

It's all been a bit unsettling.

But don't worry. If You'd Just Let Me Finish is Clarkson at his best. He may be as bemused, exasperated, amused and surprised as the rest of us, but in a world gone crazy, thank God someone has still got his head screwed on ...

'Outrageously funny...will have you in stiches' - Time Out

'Very funny...I cracked up laughing on the tube' - Evening Standard